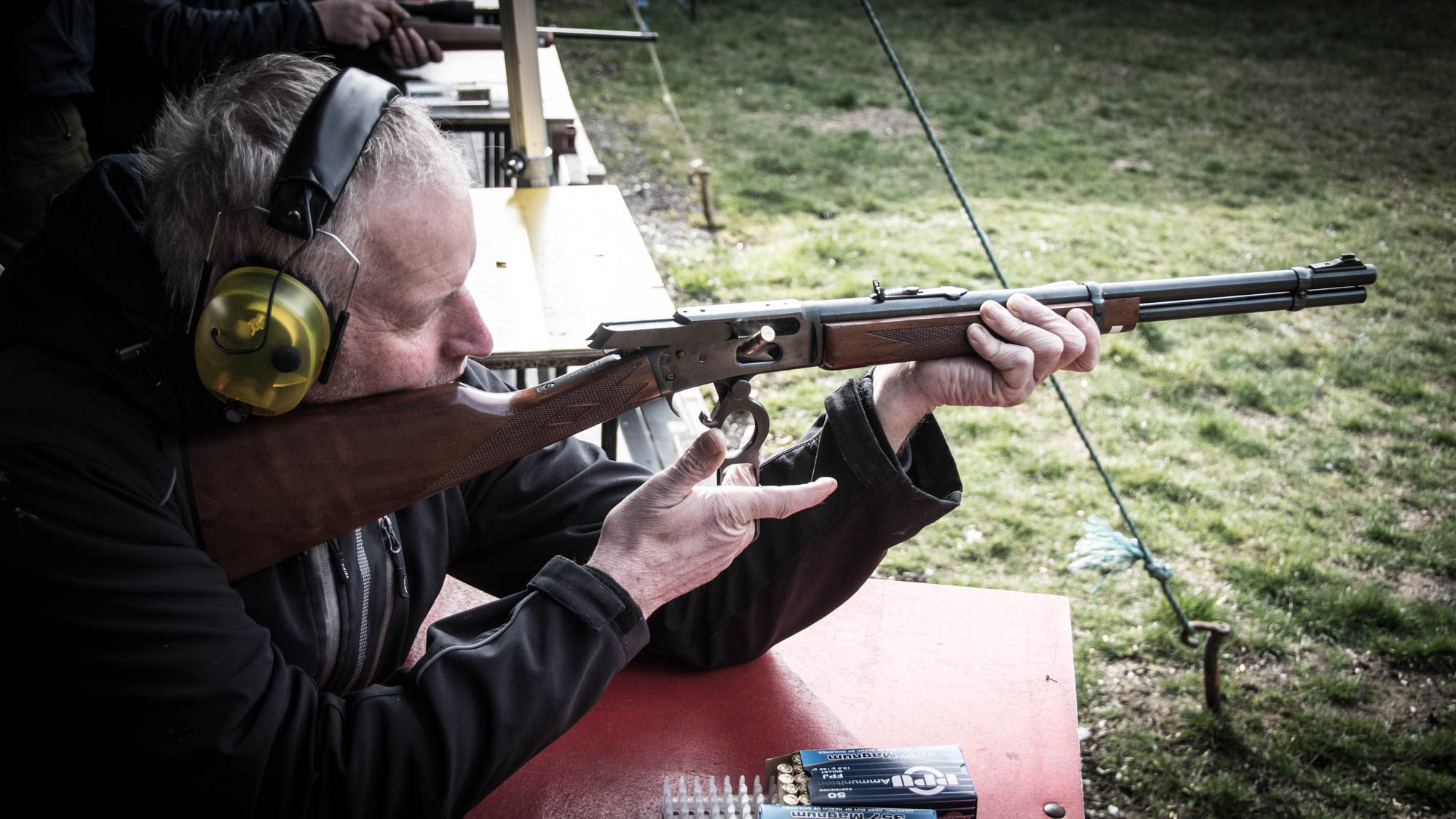 Royal Marines veterans have a field day with the Artists Rifles

An important aspect of the existence of the Artists Rifles Clubhouse (Bisley) is the welcoming ‘home from home’ atmosphere that it provides to former servicemen and servicewomen.

A warm welcome was certainly given on Saturday to 13 veterans from the Royal Marines who had served in the Falklands War, Iraq and Afghanistan, plus former members of other specialist units.

After lunch, generously supported by HPS Target Rifles, the initial plan had been to try out the precision art of F-TR shooting at 600 yards on Century Range, with competition rifles and ammo courtesy of UK-based TEAM MXM, most of whom are members of the Great Britain F-TR squad.

Mother Nature naturally stepped in, with the NRA closing Century Range for safety reasons in high winds, and so Plan B was put into operation.

Undeterred, the eager squad yomped across to Melville Range and had a great afternoon improving their gallery rifle skills with .357 underlevers, .22 Rugers and even a black powder pistol, under the watchful eyes of Artists members and RCOs Mick W and Steve S.

Team MXM (Peter D, Guy L, Asad W, Mark W, James McC) put away their long rifles to assist the vets at the firing points, and the afternoon finished with a combined .357/.22 shoot-off of 20 scoring points.

Back in the Artists Clubhouse, and with beer provided by generous sponsors Hofmeister, the party were very grateful for the attendance of Emma Willis MBE to present the prizes.

Emma is a fabulous Jermyn Street shirtmaker, and runs the charity ‘Style for Soldiers’.

Style for Soldiers was founded by Emma in response to the numerous casualties incurred in Iraq and Afghanistan.  In 2008 she began visiting patients at the Military Rehabilitation Hospital every 2 months, measuring them for a bespoke shirt as a gift of thanks for their bravery and sacrifice.

Ashley, injured by an IED in Afghanistan, then enjoyed winning the raffle for a bespoke suit to be made for him by Emma’s team up in London.

Late-stayers were accommodated at the Artists by Moss, and the veterans clearly enjoyed shooting the breeze (and the Hof) together until the early hours.

The event encapsulated all the values that the Artists Rifles Clubhouse stands for; the vets left with smiles on their faces, new stories to tell, and perhaps the odd headache or two….eager to do it all again sometime!

“I would like to thank you again for the hospitality we received.  I thoroughly enjoyed the whole weekend. Weekends like that don’t come along many times in a lifetime. We were made to feel welcome from the moment we entered the wonderful building that you have restored so carefully. You and your team made such an effort and it was an honour to spend time with great people who gave so much of their time to make it so special for us all.”
Kind regards, Smudge, Ian Smith. Former Royal Marine, Falklands war Veteran.

“To say we had a fun day out would not do any justice at all. All the vets had an amazing day and were most appreciative of the amount of personal time given, effort of events undertaken and patience with “I used to be a good shot” excuses! From all of those who attended from Poole I can wholeheartedly say on behalf of everyone a massive thank you.”
From Boot, Moz, Tony, Smudge, Tim, Jan.  Former Royal Marine, Falklands war and other campaigns Veterans.